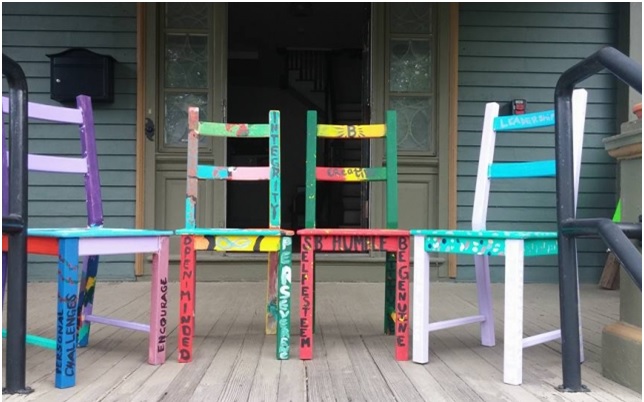 The Mt. Hope neighborhood is located in the northeast quadrant of the city of Providence, and is roughly bordered by Olney Street to the south, Hope Street to the east, Rochambeau Avenue to the north, and the New York-New Hampshire railroad to the west. Mostly a residential neighborhood, Mount Hope includes both working class and middle class sections. In addition to its residential areas, the neighborhood contains the North Burial Ground, a view of the Moshassuck Valley from many streets, a busy commercial district along North Main Street, and an industrial and commercial area to the immediate west of North Main Street.

As with many areas of Providence, Mt. Hope was first settled in the 17th century, yet did not experience any significant development until much later. The first arrivals to the neighborhood were farmers and tavern keepers who situated themselves along Pawtucket Road (North Main Street). Unfortunately, few houses still exist from this era. The Jeremiah Dexter Farmhouse (1754), still stands at the corner of North Main Street and Rochambeau Avenue, is the only structure still standing.

More settlers came to the neighborhood in the first part of the 19th century, locating primarily in the southern area of Mt. Hope on Olney Street, Bacon Street (no longer in existence), Jenkins Street, Pleasant Street, Abbott Street, and North Main Street. African-Americans, deeply ingrained in the history of the neighborhood, were the predominant residents of this new settlement. Racial tension, however, was a powerful force, and in 1831 a serious race riot erupted on Olney Street.

Even with the growth of this southern Mt. Hope settlement, the neighborhood was still largely a suburban and rural area until well into the second part of the 19th century. Characteristic of neighborhood development in other areas of Providence, industrial activity and the improvement of transportation services to the area were the two major forces in the growth of Mt. Hope.

The establishment of industry along the Moshassuck River corridor attracted large numbers of mostly unskilled laborers to the neighborhood. Developers constructed many small single-family homes, in addition to triple-deckers and other multifamily houses, to accommodate the growing numbers of workers in Mount Hope. Streetcar service came to Mount Hope along North Main Street (1875) and Camp Street (1886), leading to the rapid expansion of middle-income housing along the rail lines. Largely due to the subdivision of large private land holdings, residential expansion occurred throughout the remainder of the 19th century and into the 20th century. Furthermore, around the turn of the century, the Gilbane Company, now a major Providence-based construction company, established one of Providence’s first areas of tract housing on Catalpa Street.

Mt. Hope continued to undergo physical and demographic changes throughout much of the 20th century. In the early part of this century, North Main Street was the site of rapid commercial expansion. Moreover, urban renewal had an enormous impact on the physical structure of the neighborhood. The Lippitt Hill Redevelopment Project, spanning from the 1950s to the 1970s, resulted in the demolition of a large portion of dilapidated low-income housing in the southern portion of Mount Hope.

This project displaced large numbers of residents, particularly African-Americans, to other parts of Mount Hope and Providence. These homes were replaced by the University Heights shopping center and apartment complex, the Olney Street Baptist Church, and the Martin Luther King, Jr. Elementary School. Demographically, Mount Hope emerged by mid-century as an ethnically diverse, mixed-income neighborhood. African-Americans, Irish-Americans (whose ancestors first immigrated as workers to the Moshassuck industrial area) and Russian Jews are the major ethnic groups in the neighborhood’s history.

Today, Mt. Hope remains equally diverse. However, the neighborhood is divided along Camp Street where the area to the south of the line has experienced some deterioration to its housing stock and the area to the north has seen more substantial rehabilitation. Mount Hope maintains a consistent supply of lower and middle-income housing. Furthermore, with commercial developments, schools, medical institutions, and churches either within its boundaries or in close proximity, the neighborhood is well endowed with a variety of resources for its residents.

According to the 2000 census, 5,584 people resided in Mt. Hope, a decrease of 1.4 percent from the 5,661 residents who called Mt. Hope home in 1990. Three out of ten residents are African American, 11 percent are Hispanic, 3.4 percent are Asian, and 1.7 percent are Native Americans. In 1990, three out of four residents of age 25 or older were high school graduates. Four out of ten employed Mt. Hope residents worked in professional services, about 16 percent were employed in manufacturing, and about 12 percent worked in the retail trade sector. The unemployment rate in 1990 among Mount Hope residents was slightly higher than the citywide figure (9.5% versus 9.2%).

Half of all housing units in Mt. Hope were constructed more than 40 years ago. Housing value and median rent in Mt. Hope are very close to the citywide figures. More than half of all Mt. Hope residents moved into their present housing unit within the past five years according to the 1990 census and about one in five residents lived in his or her present home for more than 20 years.
——————————————
Sources: Mount Hope: Neighborhood Analysis, Department of Planning and Urban Development (City of Providence, 1977) and Providence: A Citywide Survey of Historic Resources, edited by William McKenzie Woodward and Edward F. Sanderson (Rhode Island Historical Preservation Commission, 1986).

About 6,000 people live in the ethnically and economically diverse neighborhood of Mt. Hope, located on the East Side of Providence. According to 2000 Census statistics, one in four Mt. Hope residents lives below the poverty level, and one in three children lives below the poverty level. About 30% of residents are African-American, 11% are Latino, 3.4% are Asian, and 1.7% are Native American.

Mt. Hope struggles with the problems endemic to many urban neighborhoods such as drugs, guns, theft, assault, and murder. The goal of the Mt. Hope Learning Center is to provide positive educational opportunities. Residents both young and old are encouraged to get involved in the Learning Center, both as volunteers and as participants; the Learning Center provides them the opportunity to come together as teachers and students, neighbors and peers. By providing free access to computers, classes, and tutoring, we encourage residents to pursue academic and career goals that enable them to transcend the cycle of poverty and crime. We provide quality educational services through community outreach and collaboration with other neighborhood organizations.

Research has shown that the social context in which people live can promote violence. Factors such as unemployment, discrimination, exposure to violence, access to firearms, gang involvement, and alcohol and drug use are major determinants of youth violence. The Providence Community Police report that Mt. Hope youth are exposed to these elements on a daily basis, and that, alarmingly, they are beginning to view this activity as a normal part of daily life. Additional risk factors such as family violence, inadequate supervision, and limited education and job skills also contribute to youth involvement in criminal activity.

While the residents of Mt. Hope have access to a number of quality social service providers, the Mt. Hope Learning Center is the only organization that focuses exclusively on providing educational services for this neighborhood, including help with homework after school and one-on-one tutoring. It was founded so that residents would have easy access to those services, without having to take long bus rides across the city to get the help they need. The Learning Center works closely with local public schools to provide supplemental services and activities, such as field trips and an open community computer lab. The types of educational services we provide can help to minimize or eliminate many of the risk factors outlined above.